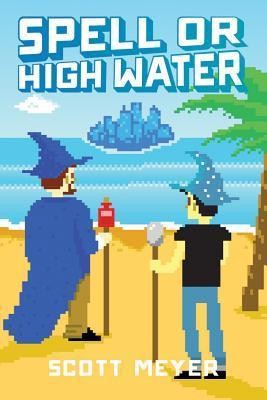 I wasn’t planning on reading ahead in this series after “Off to Be the Wizard,” probably because while the concept was super original and therefore highly entertaining, I already knew it. And while the characters are all hilariously tongue-in-cheek, I couldn’t identify with any of them because they were all caricatures, and therefore I didn’t really care what happened to any of them. But then I found out that this one was set in Atlantis. My next series involves Atlantis, so I had to read on.

“Spell or High Water” still follows Martin and his former wizard mentor Phillip, who (by means of the Shell, a computer program that controls every person and every object in the known universe, as well as time) are invited to a summit in Atlantis of all of the wizards who have discovered the Shell throughout all ages of history. Atlantis is a matriarchy, constructed by a woman named Britt. Britt exists twice in one time period, as Britt the Elder (who built Atlantis) and Britt the Younger (who has yet to build Atlantis, and who is sullen and irritated about the fact that Britt the Elder patronizingly predicts her every move. Phillip is particularly sensitive about this, since he has issues with anything that smacks of Determinism–which makes for a witty dialogue on the philosophical concept of free will.) But it appears that someone is trying to kill Britt the Younger… which again, brings up the whole time paradox: don’t we know they’ll fail, since Britt the Elder exists? Or is the plan to eliminate Britt the Younger and if that occurs, Britt the Elder will also vanish and Atlantis will cease to exist?

While Martin and Phillip try to unravel all of this, Martin also attempts to court the very reticent Gwen, whom he met in medieval England but who decided to move to Atlantis (as do nearly all women who discover the Shell, since no other time period in history is particularly pleasant for a woman with magical powers. You know, witch burnings, drownings, hangings… etc.)

And finally, thousands of years in the future, the wizard called Jimmy (aka Merlin, previously banished and stripped of all access to the Shell for attempting to wipe out an entire medieval village and kill all the other wizards in his attempt to recreate Middle Earth) manages to find his way back to medieval London. This basically sets up the next book in the series.

I still really didn’t get into the characters and therefore didn’t become emotionally engaged in the story. But I laughed out loud quite a few times, and for that alone, it’s a worthwhile read. I just love the tongue-in-cheek humor!